Ah, the beautiful Gulf of Mexico in a pandemic! This photo taken August 7,2020, shortly after my move to lovely Venice, Fla. The area's Fishing Pier is about six miles from my residence. Loving my new place so far!

Me and the gators! One of the first outings I made when moving to Florida in 2015 was to visit Gatorland near Orlando and take the zip line!

This photo appeared in the Tampa Bay Times sports section on May 6, 2020, as part of a story about what area residents were doing for "alternate sports" during the COVID-19 coronavirus pandemic. In my case, the gymnasiums and weight rooms closed, giving me the longest hiatus from those activities in three and a half decades, So, to keep at least somewhat active, I doubled my monthly bicycling from 100 miles to 200, and this photo was taken at a stop on a local ride.

I've been privileged to do a bunch of world travel, including visits to all six subarctic continents, and two round-the-world jaunts. These shots were taken in March 2018 during a stop in Istanbul, Turkey, on the second of those trips circling the globe, a trip that also included Singapore. I call this "On the Steps In Western Asia" (with an intended parody to Alexander Borodin's "In the Steppes of Central Asia") as I may never get to Central! Took a ferry across the Bosphorus in Istanbul that separates Europe and Asia. Leaving the Asia side to go back west, I posed for a pic on the boat's steps!

May 2019: Me in the first officer's seat in the cockpit of a restored (for display) Lockheed Constellation at the opening of the TWA Hotel in the revamped iconic Idlewild Trans World Airlines Flight Center at John F. Kennedy Airport in New York City

April 2018 The 50th reunion dinner of the Class of 1968 of Polytechnic (Upper) School, Pasadena, Calif. That's me top row center.

An occluded Mount Fuji and Me at Naritasan Temple on my third annual spring/summer trip to Japan, March, 2017

Visiting Toronto, Ontario, at the CN Tower in May, 2009

During batting practice at SunTrust Park, Cobb Co., Ga., before a scheduled Atlanta Braves-Texas Rangers game, September 5,2017; I have been to all active Major League Baseball parks

Older but still at least trying: In gyms in Florida

Also after the Florida move: A phony "screentest" at CNN HQ in Atlanta as I took refuge from Hurricane Matthew in October 2016

This picture was taken Dec. 1, 2001, in front of a poster at the Hong Kong Museum of History.

My 50th birthday picture: taken in Kuala Lumpur, Malaysia, July, 2000, from the observation deck at the Kuala Lumpur Tower, looking out about a mile to the Petronas Towers, which at that time were the world's tallest buildings (if you counted the uninhabited spires on top.)

That's me on Sentosa Island, Singapore, in April 1998 with Merlion, Singapore's National Symbol, and at the Colisseum in Rome in February 1999.

The top running photo is me in October 2000, not quite half way into the Marine Corps Marathon in Washington, D.C. I finished the race, my eighth (and last!) full marathon, and my fifth on the course in Washington. The shirtless runs were on far too hot days near the finish of the Trinity Hospital Hill half marathon, Kansas City, Mo., in June, 1996 and 1997. And finally, my marathon tattoos! -- permanently celebrating my eight 26.2-miler finishes and p.r. across the right shoulder blade. There's a separate Marine Corps Marathon tattoo on the left of the back, as five of my eight finishes have been on that classic race in Washington,D.C./Arlington, Va.

A long time ago: Me on the Occidental Life Insurance Co. of California float in the Tournament of Roses Parade, Pasadena, Jan. 2, 1978

Among my favorite trips to Major League Baseball parks were SBC (at&t) Park in San Francisco, top, in 2007, and the new Yankee Stadium in The Bronx, N.Y., in 2009. 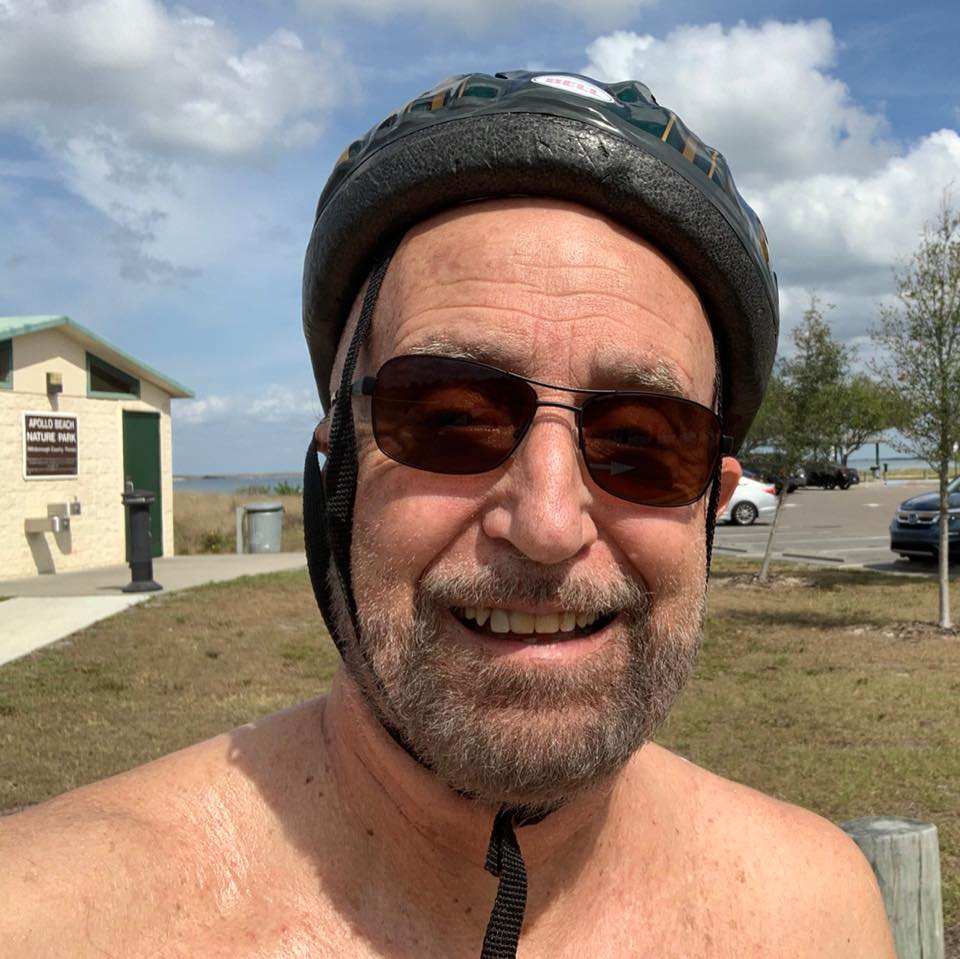 I tried driving that camel while stopping in Giza, Egypt, on a round-the-world trip for my 40th birthday. The bungee jump was in Orlando, Fla., and the skydive was at the Oz Sport Parachute Club in Lyons, Kan.

The bottom photo was snapped during a quick break in a bike ride, Apollo Beach Nature Preserve in Florida, March, 2020.


For more about the Marine Corps Marathon, click here.

To use Google, my favorite search engine, click here.